Sage Francis And The Best Birthday Ever 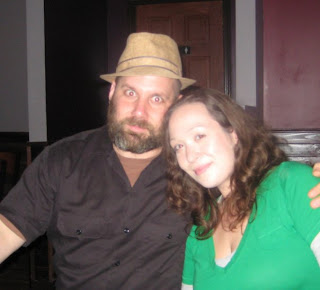 Sage Francis is one of my most favorite artists. He is definitely my favorite rapper. And you know what? He was in town on my birthday, playing a show at the Bottom Lounge. Hell yeah.

Sage is a unique rapper. First of all, he's a tubby, bald white dude. You wouldn't look at him and say, "Damn! Who's that rap superstar?!" But then again you probably wouldn't look at me and assume my love of hip hop. Sage hails from the hardcore, menacing streets of Providence. That's right, the oft-talked about rap epicenter of Rhode Island. He got his start as a slam poet, a fact that you can hear in his rhymes and speech patterns. His lyrics reflect on childhood scars, relationships, socio-political turmoil, and farts. Yeah, farts. He's well rounded, both physically and artistically.

Sage Francis has been a favorite of mine since my friend Christine put two of his songs on a mix tape for me when we were in high school. And over the years my fandom has grown and grown. You see, this time last year I had a terrible bout with depression. I could not sleep, clumps of my hair fell out, persistent anxiety ruined every aspect of my life. It truly sucked. And I listened to his album Human the Death Dance nearly every sleepless night. Especially the song Hell Of A Year. At a time when everyone and everything felt so distant, I felt his songs pull me back to reality. Yeah, it sounds cheesy. Whatever.

Last August, Sage posted on his Twitter page that he was in Chicago and wanted to meet all of his fans at this bar called The Bad Apple. Even though I was nervous, I went all by myself to this new bar. I got to meet him (see the picture above!) and got a huge bear hug. Two hugs, actually! We hung out in a group talking about festivals and sharing veggie burgers. I offered him cello recordings and he told me I needed to play live more. And, well, I did. Once in awhile I email him, and he always writes back. Even if he secretly thinks I am creepy, he doesn't show it! Seeing him earlier this month on my birthday signified the close to my "hell of a year". I took a look back and saw how much I have changed. I am happy, confident, open to new things, and most importantly, making music. It was a lot of work, and Sage Francis was unknowingly a huge part of it.
Posted by Katelyn at 11:38 AM

Promote Your Page Too